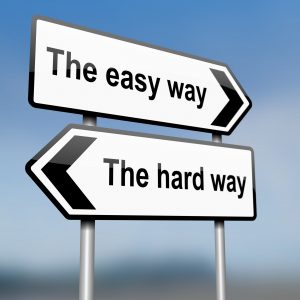 Decisions Made Too Quickly Can Often Cause Long Lasting Bad Results

Many years ago, as a young engineer I had an experience that I have never forgotten. It was unexpected and sudden, but changed the way in which I think about many things.

I was invited to join a group of engineers all of whom were very fresh in their careers and eager to “make a difference” in the world. We wanted to do something “special” and decided to form a non-profit foundation by combining our resources.

As a result, we were able to gather more engineers and more resources such that we quickly were able to award college scholarships to well deserving students in the areas where we worked.

After going through all of the proper channels, we were given permission to interview some juniors and seniors from some of the local schools so that we could make our awards in a few months. It was during one of these interviews that I received a response that has stuck with me for all of these many years.

During the interviews, one of our questions was “If you were able to pursue your favorite career in college, what career would you choose”. On this day, I asked this question of a young man who was literally weeks from graduating high school near the near top of his class in math and sciences and was highly recommended to us.

He responded to my question by saying, “If I had my choice, I would like to become a nuclear engineer!”. This surprised all of us because that career was not yet mainstream and on the minds of many students. So one of the other engineers then asked him why would you choose that career.

The student’s answers were perfectly sound, full of many well thought out concepts. In particular, he summed it all up by saying that if he only could do one thing with his life, it would be to learn everything about that subject because it totally satisfied him in every way that he could imagine. He said that he truly loved thinking about all that it represented. The other engineers and I knew that the next student who would be receiving a scholarship was sitting in front of us.

Then the student asked us a question that became a “game changer” for us and for the young man.

He asked, “And how long will I have to study to get this career?”

One of the engineers said, “Most likely six years. Four years for your B.S. degree and maybe a couple of years in graduate school if you don’t continue for your doctorate”.

His response was, “Well, forget all of that. I don’t have that much time.” I am skipping all of that and just getting the first job I can find, no matter what it is. I need to make money right now and that is what I will be doing. Thanks, but no thanks.”

My response to him was, “What do you want to be doing in six years, if not being a nuclear engineer?” His answer was, “Whatever I can be doing, but six years is too long to wait, so I must be meant to do something else.”

And with that, he got up and left very abruptly.

We were stunned and just sat in disbelief for several moments trying to understand what had just happened.

Later, the assistant principal explained that this student’s family was under a really tough economic situation and their situation had the student stressed as a result. She further explained that the student is really brilliant and would do well in college and in any major he would focus upon, but he cannot see that far ahead. His dreams will be sacrificed for a bit of temporary relief.

We offered the student a full scholarship, but he never took it. Instead he went in a different direction and never attended college at all. After a few years, we lost track of him completely, but were told that he actually did give up on his dreams.

Over the years, many of the engineers from the foundation and I have mentioned this student to each other and wondered what else could we have done to have saved him.

That thought still haunts us.

So, when I believe someone has the answer to their dreams right if front of them, but will not follow through because of some short-sighted excuse, it troubles me and I remember that student who had so much potential.

The other day, I had someone say to me, “Your entrepreneur start-up report has too many details in it. Can’t you tell me what it is all about in about three paragraphs? And why do you tend to provide so much information on your websites and your blogs? That’s just too much information and it takes too much time to read.”

Are you missing a golden opportunity too because you want a quick result?

Imagine how a childless couple who have been yearning for a baby feels to suddenly be told that they are pregnant. There is such joy and expectation that finally their dreams are coming true. Can you imagine how they would feel upon hearing the news?

Well, if you can, what would you say to them if when they are told that the expected delivery date is still about 7 months away and they say to the doctor, “That’s going to take much too long. Can we just have the baby next week?

There is a gestation period for everything. For babies and for dreams. The important thing is to follow through and to not abort either, if you want to receive your dream.

Are you willing to follow through to realize your dream?